Diana S. on Quarter Horse: "... the end of our saddle problem" 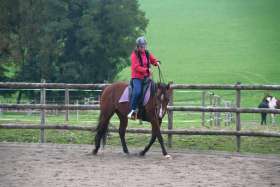 "Once upon a time ... this is the classic beginning of fairy tales. In our case at the same time the end of our saddle problem.

Anyone who reads this reference will perhaps begin to support it. A quarter horse - is not it the typical western terrace and does not belong to a typical western horse not a typical western saddle with horn (to hold?)), Comfortable as a sofa etc.? Yes, it was originally planned by me. If not the physique of my young horse had made a dash through the bill.

We had a very high quality Western saddle - it should fit, that was the most important when buying. Unfortunately, it soon became apparent that he did not fit for this horse. My quarter is very rassetypically short in the back, but at the same time very much overbuilt. The acquired saddle was too long, forming a bridge. As a result, my horse became more and more tight, so it was clear that "the typical Western saddle" could not be the end solution for us - the saddles my quality was all too long.

When we moved to our new home I got to know our stable owner, who owns two Iberosteltel (Vaquero Breitschaft) and the company Iberosattel® strongly recommended. An alternative solution had to be made - so an appointment was agreed. Mrs. Thoma arrived punctually on the agreed date and then stayed longer ... the most detailed, most competent advice I have ever experienced in this area myself or with others.

At first, the horse was examined - and there, too, questions were asked which should always be relevant, which had never asked me before: the weight of the rider? Does another person still ride the horse? What is to be done with the horse? In our case, this means that I want to go into the terrain - the saddle should be comfortable with a large support surface (the one I think is the biggest plus of the classic western saddles - which is the other saddles at all, I was not even aware). I also ride several courses a year - the saddle should sit me down correctly, while giving me enough legroom. Mrs. Thoma immediately had a saddle model in the back of her head, which she did not want to reveal to me - after all, I should make my decision without bias.

First of all, she should be right. Since my wish was that the saddle should have a gallery, it went with three corresponding models to the riding field. I was allowed to make all three (very little used) pro-saddles extensively - Mrs. Thoma saddled countless times, straightened temples and -am most importantly - asked me always after my feeling. How does the saddle feel? How does the horse feel like this? Does communication work? After quite quickly realized that the saddle, which I had secretly seen on the Internet already (the Vaquero brochure) is nothing for us (at this point I would like for this very reason strongly recommend a preparation of the different models - by nothing to replace ), I felt pudelwohl in the third model immediately.

"Soft" - that was my first thought. I could move my leg just as freely as I was used to in the western saddle without the need for any tacks. As it hurried and I had decided (and my horse ...) fortunately for an existing model, Ms Thoma made it possible that two weeks after the order had been handed over, I did not hold my new saddle padded for my horse Season 2015.

As a western rider, I had some problems getting used to the English stirrups - so I ordered Western fenders and ride my barock saddle with westernfenders and stirrups. During the entire time together, Iberosattel® has always been very customer-oriented - for example, during the production time of my Western fender, I was offered free English stirrup straps and baroque stirrups. Also otherwise the contact was always friendly, uncomplicated and superschnell.

Meanwhile, I have been my Ibero Baroque for a three-quarter-year - the first control date came the employee Mr. Wolfrum. Also here the coworker took for me as a customer again quite a lot of time, even if there was nothing to be earned, because the first control term is free. The advice of Mr. Wolfrum was extensive, competent and of course super friendly - as with all the staff of Iberosattel, with whom I had so far had contact. We can recommend Iberosattel® best conscience and are so satisfied that my young mare now also got a Iberosattel. The best proof of satisfaction."

Diana S. with Ibero Barock on her Quarter Horse