Chris W. on her Quarter Horse Luke: "We are very satisfied and say: Thanks! ..."

"I have easily ridden my almost five-year-old Quarter Luke about a year ago. It is in the reiningtyp, is thus "simply only wide" (Quote of the saddler). With the powerful shoulder, a saddle in the dressage style was hard to imagine, according to information from several saddle experts. So there was a Western saddle and I rode with Luke. Various other possibilities, such as fur saddles, were thoroughly considered before. 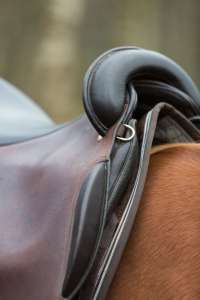 This went quite ok, I was never quite satisfied with the western saddle. At least he looked beautiful. Susanne Meyer (see report above) always mentioned that Iberosättel might be a solution and I began to look for possibilities for a really appropriate saddle, to google and to talk with knowledgeable people. I began to identify a few matching models / manufacturers / traders and write emails to request information material and, above all, experts on the ground. A good saddler, which combines knowledge, skill, experience and reliability, and then even horses as such, is like a needle in the haystack.

As always there was unfortunately not enough response and emails sent. Elsewhere with Iberosattel: Contact form filled in on the website, shortly thereafter nice email with all necessary information and the data of the saddler: Corinna Krieger. A few moments after that, I had arranged an appointment with her.

She came a few days late, advised competently and patiently. I had prepared a few questions with the help of a friendly saddler (to quickly find out if I would trust Mrs. Krieger) and had switched over a somewhat unconventional advice from our animal communicator via whatsapp and sent him pictures on an ongoing basis to get the horse's perspective.

The saddler tolerated this kindly and patiently. After less than an hour we were agreed, the saddle adapted, bought and paid. Since then he has accompanied us. Recently there was an adjustment, because Luke has become wider again.

Sometimes I try the western saddle, but Luke simply likes the Vaquero Breitschaft. I am very glad that we have a good saddle at the moment and hope that he will accompany us for a long time.

We are very satisfied and say "Thank you! To the team from Ibero and to women wars from high to Ross from Monheim, recommended by Ibero."

Chris W. with the Vaquero Breitschaft on her Quarter Horse Luke (Photos of photographer: Sandragrafie)