Katja L. with PRE Six Pack: "Who once felt the difference ..."

"My PRE Six Pack is six years old. He has been in my possession since march. He was just slightly ripped off and unfortunately he made a name for the Sereta. He was riding in extreme straightening. I tried to put it in the forward - downward direction, which I have succeeded after some time. My goal is to go with him in the classic dressage. 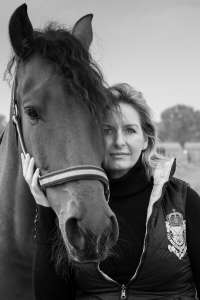 Although I thought my old saddle was good on him (3 saddles in seven months), I was wrong. I noticed it in October at a dressage course. His entire back muscles had shrunk enormously. I was close to tears. The poor animal. On site was accompanying a physiotherapist for horses. She confirmed that it was on the saddle.

My saddler and longtime friend, Andreas Mazath, had left the Amazona Dressage for a trial. At the time I did not want this saddle. But I could not go on with the old saddle. I immediately sent my girlfriend to get the Amazona. I then rode home with it and immediately realized the difference. The horses go freer and are much happier.

That very evening I called Andreas and told him that I would take the Amazona Dressage. He encouraged me in my opinion.

Unbelievably, as in just four weeks, the muscles on the back was rebuilt. The support surface and wide spinal canal are the secret of these saddles. I am so happy that Six Pack goes well and he is even more joyful at work. I can recommend this saddle to everyone. Who once felt the difference, how free the horses go with it, will always want that."

Katja L. with the Amazona Dressage Comfort on her PRE Six Pack