Katrin R. with Arabian mare Gui: "Was very enthusiastic about our development ..."

"When I brought my new horse, a 16-year-old thoroughbred mare named Guazam to me in February 2014, I already knew that our way would not be easy. It was not clear, however, that he was going to be so stony. 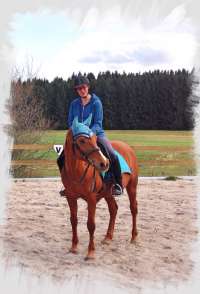 In addition to various other health problems, she had hardly any musculature and marked pain in the entire back area. I did not take over your old saddle from the previous owner, because my own saddle fit much better to Gui. But unfortunately not optimal, which she also showed me very clearly. Of course, with typical Arab fuss: back away, whisk out and down through the middle. And when it was really bad, we rode Rodeo, which unfortunately ended with a broken rib.

So everything was clear, another saddle had to come. Unfortunately, this should be an expensive misplacement. After initially really good impression, showed me again very soon and very clearly that the second saddle was not the right one. Unfortunately, the dealer was anything but kulant about the return of the saddle, which is why this saddle still lives in our cellar.

To my great happiness, my girlfriend had also bought a Arab horse, which was already equipped with an Iberosattel®. On her and the recommendation of two other girlfriends I made the decision to contact me with Iberosattel.

Already the first conversation with the good Stefan Wolfrum was a good thing for me. He gave me courage and above all I got a quick appointment with him to the saddle. After a short physiotherapeutic treatment of the painful Arabian backdrops, we found the saddle together from 10 different models, which fit both Gui and me: a Dressage Andaluz with short comfort for the sensitive Arabian princess, as well as adjustable velcro pads and a bit of a stylish nibble for me.

Stefan advised me excellently in all questions, whereby I never had the feeling in a classical sales situation to stuck. I realized very clearly that he was concerned about the well-being of horse and rider. Now it was only the three months waiting to go.

Then it was time. In the middle of January 2015 I held the good piece in my hands and the next day I could finally ride again. And Gui was more relaxed than ever before. For the first time, I could feel her arch of the back below me instead of pushing away. Since then, we have been working diligently on building their muscles.

The first adjournment took place 1.5 months after the delivery and the chamber could already be expanded. Another 6 months later, my horse again signaled that the saddle was no longer optimal and promptly Stefan could expand again half a size, as well as improve the upholstery. Stefan was very enthusiastic about our development.

I am infinitely glad to have got our wonderful dressage saddle. Without him, Gui and I would probably have moved further in this devil circle of pain and frustration and would never have reached the point of trust and joy that we are today. Perhaps I would have separated myself from her.

Thank you Iberosattel® team for your contribution!"

Katrin R. with the Dressage Andaluz on her Arabian mare Gui - Iberosattel: Thanks for the great reference!